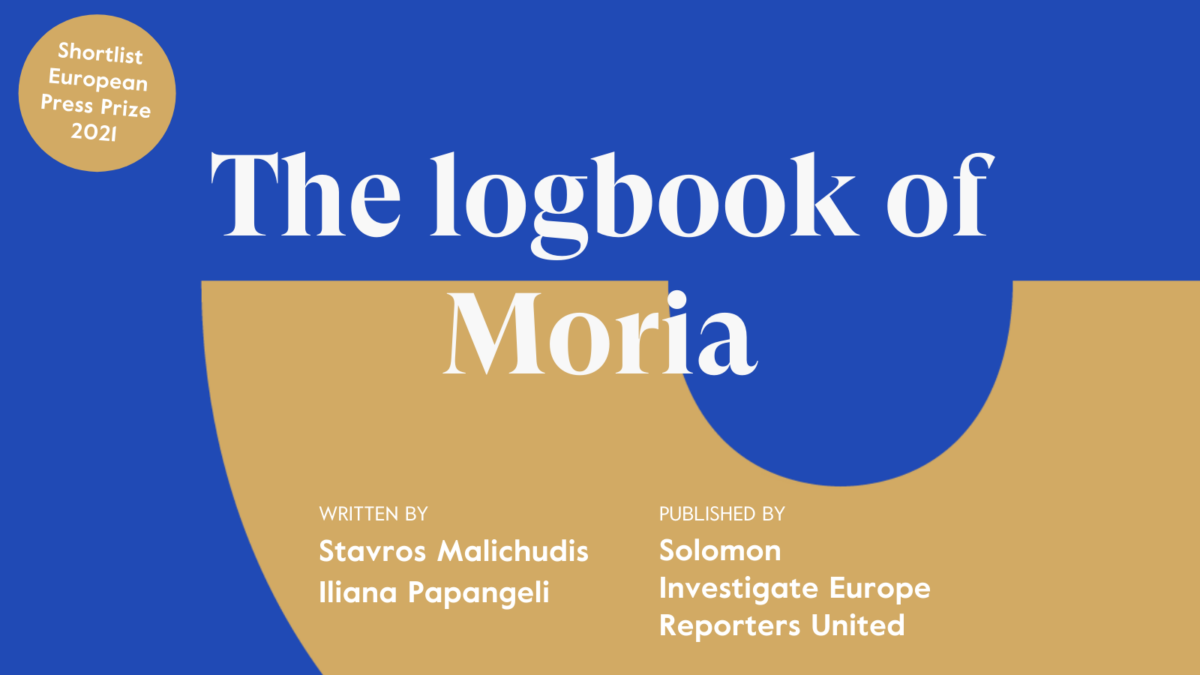 Our team is thrilled to announce that the “Logbook of Moria”, a story by our colleagues Stavros Malichudis and Iliana Papangeli, and collaboration between Solomon, Investigate Europe and Reporters United, has been nominated for the 2021 European Press Prize for the Distinguished Reporting Award – for exceptional reporting, and telling a story in the best possible way.

The Logbook of Moria, a piece on the horrors experienced by unaccompanied minors in the safe zone of Moria’s refugee camp, was published in November 2020 after weeks of hard work, during a time when censorship and restricted media access to refugee camps started to raise the alarm about press freedom in Greece.

Τhe recognition of our work which comes with the nomination for one of the most prestigious Press Prizes on the continent means a lot to us. We view it as an important reward for the dedication of our team, who exemplify independent journalism and provide original, on-the-ground critical reporting on refugees and migration, always demonstrating responsible and fair coverage.

A personnel logbook, maintained by employees of the International Organization for Migration (IOM) was found in the aftermath of the fire that ravaged Moria, Europe’s most notorious refugee camp, located on the Greek island of Lesvos. Documented by the people who were there to protect them, this book demonstrates the horrors that unaccompanied minors were left to endure. 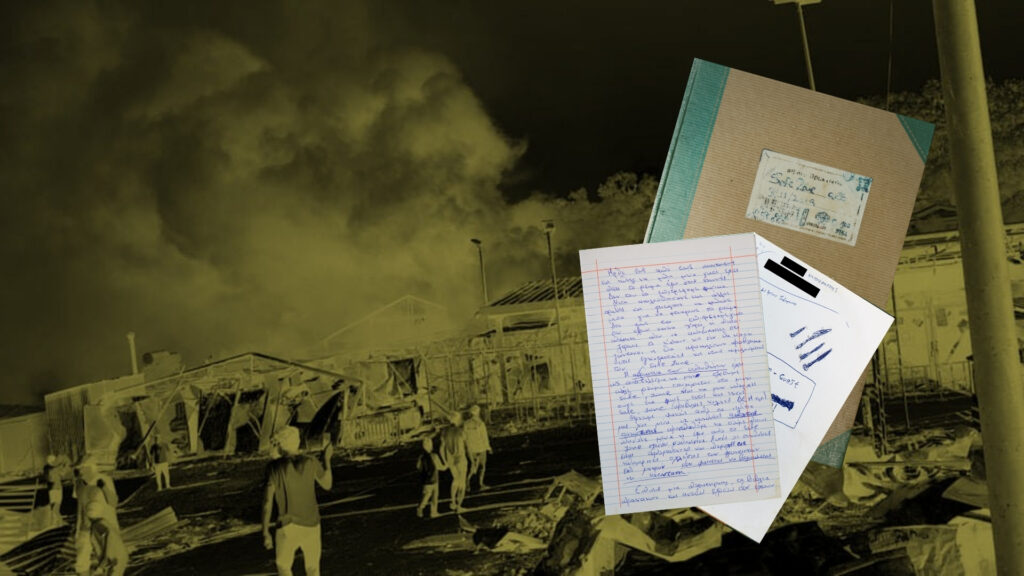 The Logbook of Moria was published in more than 12 media outlets across Europe, from Greece to France and Norway, in 8 different languages, and we’re more than grateful that, today, the piece continues to receive even more attention and its impact increases. 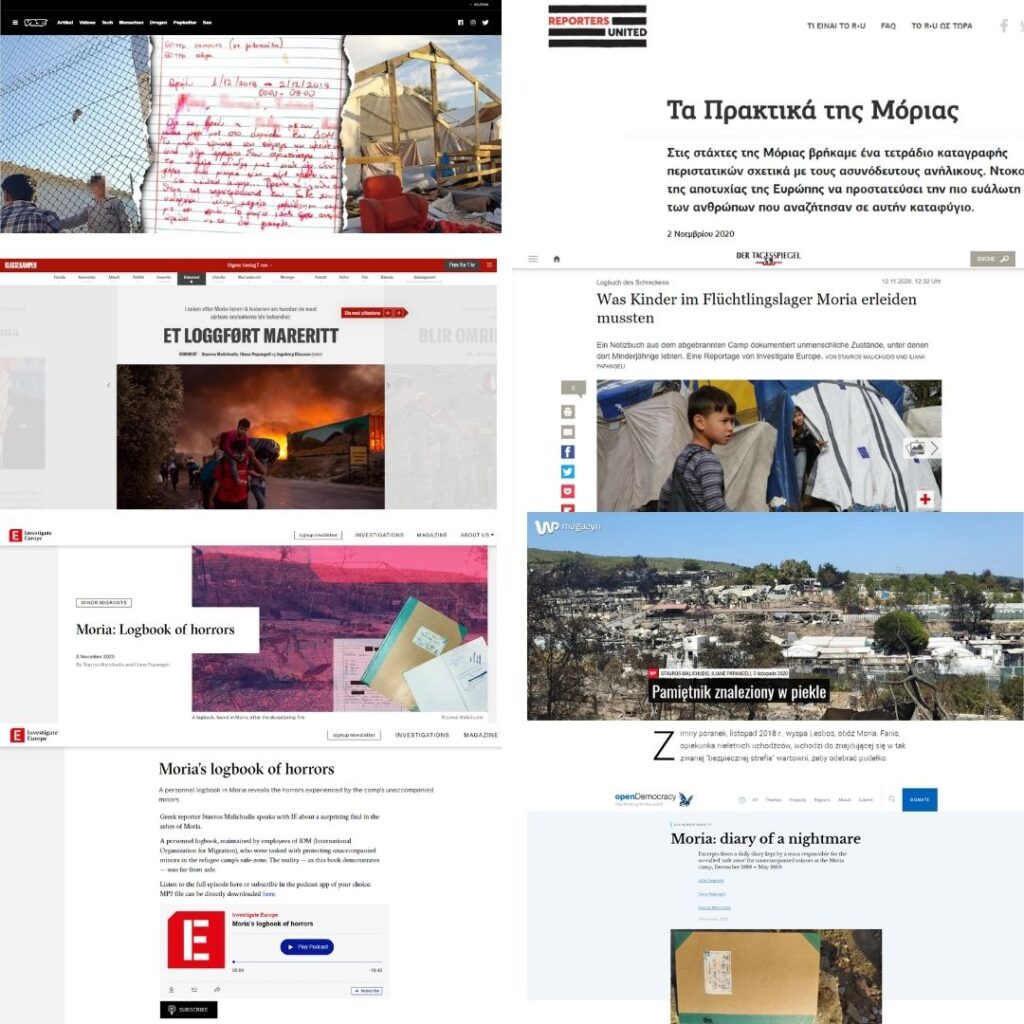 Meet the people behind the report

On September 16, 2020, Stavros Malichudis was reporting from Lesvos island, in the aftermath of Moria’s fire. Walking in the area of the camp that was known as the “jungle”, he found a logbook that had survived the fire that burnt everything to the ground. He took it with him back to Athens and, together with Iliana Papangeli, they started work on its content and the story behind it. Soon, Elisa Simantke from Investigate Europe took over as their editor. Here is what the people behind The Logbook of Moria say about the story:

“When I returned to my room that day and had a chance to carefully read the logbook, I knew we had found evidence of great importance. Because, although many well-reported accounts of Moria’s reality had been produced before, this time it wasn’t us reporting, or a source’s view; it was original, untouched testimony from the people that were there to protect the minors, but were just unable to do so. I am grateful that I got the chance to work on this article with beloved colleagues and for the audiences that this European story reached. And I feel content knowing that this historical proof, which survived the fire, will serve as a reminder of the preventable consequences of Moria’s misery for decades to come.” – Stavros Malichudis

“The story of the Logbook of Moria became the most important thing we found ourselves writing about last year. Mainly because we were deepening an issue we have worked on consistently, only this time, using stronger means, and certainly carrying more despair. The misery that unfolds in the pages of the logbook is indisputable evidence of Europe’s failure to protect the most vulnerable. These children are the human cost of Fortress Europe.” – Iliana Papangeli

“We are very proud to have participated in publishing this important story and glad to see it receives the attention it deserves. The world should not be allowed to ignore the situation of Minor migrants in Europe and especially the dire situation on the Greek islands. This story was a chance to provide our media partners and readers with real insight: a first-hand reporting by those who normally never speak to the public. We – Solomon, Reporters United, and Investigate Europe – put a lot of effort into the fact-checking of the material while protecting the personal rights of the staffers and those mentioned in the reports. It was absolutely worth it.” – Elisa Simantke

It’s an honor that our work has been selected among exceptional and impactful stories, and we’d like to express our true congratulations to all the nominees!

Thank you always for the support.