An interactive map for filming locations in Greece

Click anywhere on the map to see information on each film or TV production. Map created with kepler.gl and mapbox.

On this map each point corresponds to a shooting of Greek or international film and television production as recorded on IMDB, the world’s most popular online database of information related to films and television programs productions. We developed a program code that visited more than 2800 IMDB links about productions that had at least one spin in Greece. Our goal was to spot the areas of the country that creators most often choose for their films.

In order to mark on the map the most frequent filming locations in Greece, we used Google’s Geocoding which automatically identified the coordinates of each location. These data may be of particular interest at this time due to the expected increase in productions in the country, following the implementation of Law 4487/2017 on the production of audiovisual works in Greece which provides a 35% return on eligible expenditure incurred in the country.

It has already been announced that 30 Greek and 28 international productions have invested €56.4 million in Greece.

On the interactive map, you can read through historical data on the film productions in Greece and the specific shooting locations. The lighter the color of each spot, the more shootings occurred in there. Many points are located approximately in the geographical center of the area in question. The perimeter of each point depends on the rating received by IMDB users, with those films not rated having the smallest perimeter and those with the highest rating the biggest. 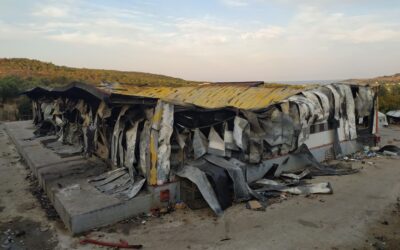