The Greek government has been trying to relocate victims of the Moria fire to a new temporary shelter. Asylum seekers are reluctant to go there.
/ Stavros Malichudis
September 14, 2020 “We are better off here, that place is like a prison”
The Greek government has been trying to relocate victims of the Moria fire to a new temporary shelter. Asylum seekers are reluctant to go there.
/ Stavros Malichudis
September 14, 2020

Rizwan is not considering going to the new camp.

The 42-year-old man from Afghanistan believes that it is safer for his family (his wife, Afsana, his 2-year-old son, Ferdous, and his 6-year-old son, Sakhi) to remain on the coastal road connecting Lesvos’ largest city, Mytilini and Moria camp, where they have found refuge since the night of September 8, 2020, when a fire reduced Europe’s biggest refugee camp to ashes.

“We’ve seen pictures from inside, we know how it is,” Rizwan says. “We’re not going. We’re better off here, even in Moria it was better than that place.”

The population of Moria camp, including asylum seekers of up to 20 different nationalities, has always proved creative in forming its own vocabulary.

So, just like the olive grove around the initial structure which hosted hundreds of makeshift tents, was widely known as the “jungle”, the new facility that the Greek government has rushed to prepare over the past few days, just over 1km from where the approximately 12,500 victims of the fire have been sleeping rough since Tuesday night, has already been named: the desert.

“At least at Moria camp there were trees, there was some space, and you could walk around or exit when you got tired of the place,” Rizwan explains. “But there? There is no shade at all and nothing to do. No electricity, no space for the children.”

Rizwan is aware that if his family decides to enter the new camp, tests negative for COVID-19, and registers, they will not be allowed to exit the facility for at least four months. “This place is like a prison,” he says.

“We are told by people that went there that they don’t even let them exit their tents.”

Life in despair, but not entering the new camp

The possibility of remaining for four months in a closed center, with approximately 3,000 other asylum seekers, is not the only reason that Rizwan does not wish to move his family into the new facility.

Fights had been a common occurrence at Moria camp, he says. Tensions too. Fires as well.

Rizwan, who registered at the camp nine months ago, and ran his own butcher stall in its notorious market, in order to support his family until their claim would be processed, says that he remembers all of that, and that images from the fires still haunt him.

“I had just recently bought a fridge where I was able to store 100 kilos of meat,” he says. It had cost him €600 to buy from a local supplier, but when the fires began “everything happened very fast” and he couldn’t save it.

“I didn’t manage to save most of our things. There was fire everywhere. I called a Greek friend of mine asking what was going on, and he just told me to run. So I ran, I took a plier, cut the barbed wire and managed to save my family.” 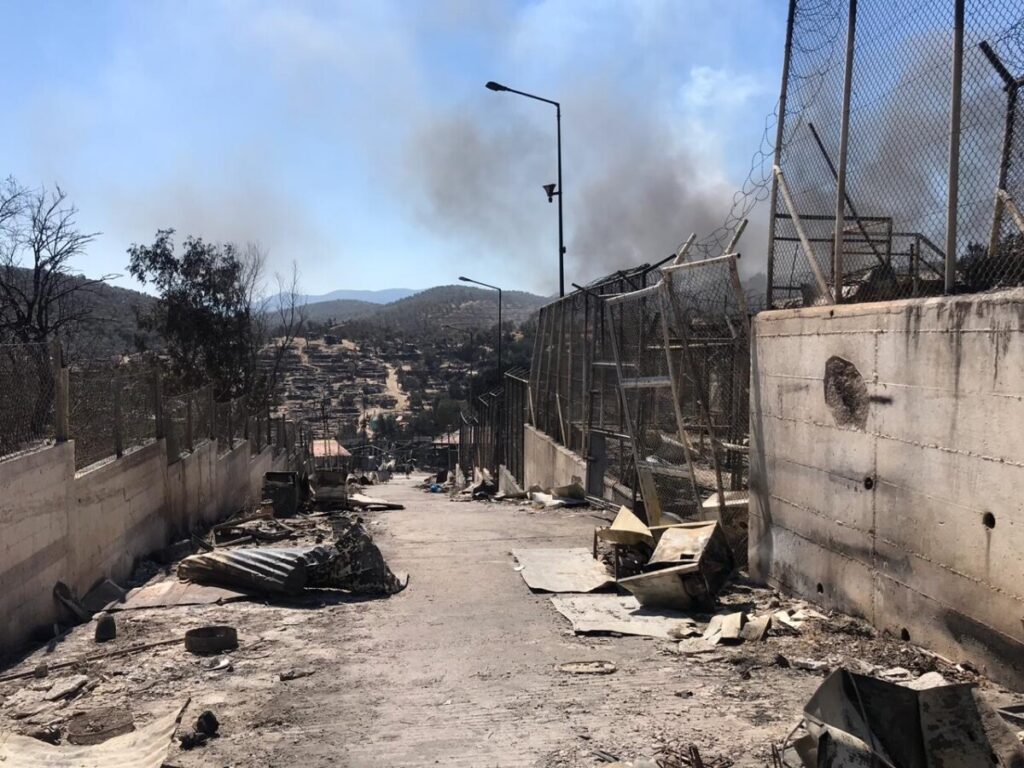 Rizwan believes that, given the current conditions, the possibility of another fire happening can’t be ruled out. This could be anytime now, he says, either from the locals stating that they will not accept any kind of reception facility for asylum seekers on the island, or from indignant asylum seekers who will not willingly enter a closed camp.

“In Moria if something like this happened, we could flee. There you have sea from the one side, mountains from the other, and barbed wire. How are we going to escape through this barbed wire if there is fire?” he says.

I’ve been meeting Rizwan for four days now, each time in the same spot where his family has set its makeshift tent. Each time he invites me for a chat over a cigarette that he offers, we talk while observing his older son play with marbles on the ground with his friends.

Every time I see him, Rizwan is wearing the same black T-shirt and a brown pair of pants. He has admitted to me that these days his children and wife don’t sleep well, since they all share a mattress they managed to save from the fire, and the kids are still affected by the fire.

Just like many other women around us in this new makeshift camp, his wife cooks the family’s meal on a fire created by wood collected from nearby land. Their children bathe in the open using bottles, which are filled with water provided by holes in the sewage system.

And yet, the option to enter the new facility created by the government doesn’t even cross his mind.

“Moving from one hell to another is no solution”

The vast majority of the fire victims, who are living in the same dire conditions as Zirwan’s family, explicitly share his view.

When asked if they will go to the new facility, terms like “prison” are often used in their replies, as the images and testimonies from others already inside the new camp have circulated on social media and have prevented many from considering this option. 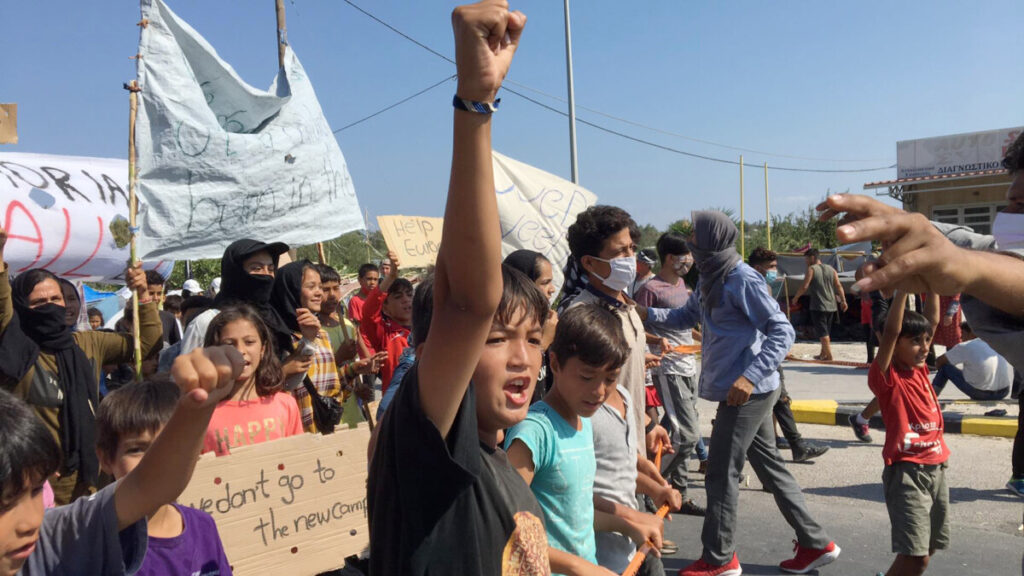 Kids protesting against the continued containment of people on Lesbos island. 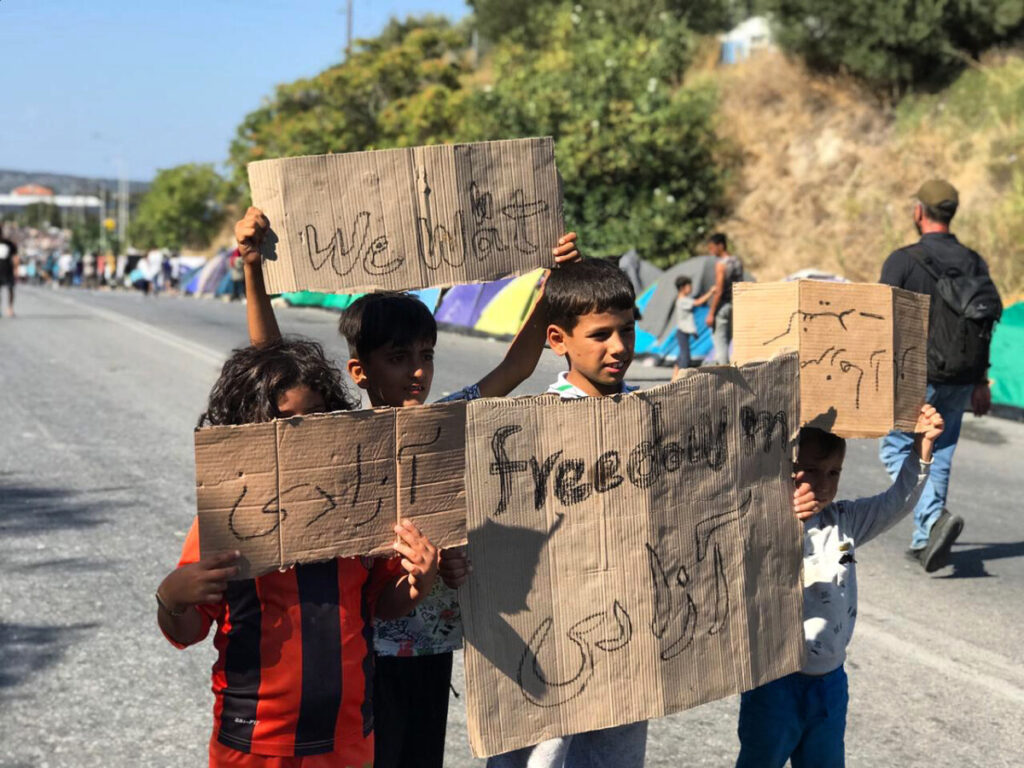 Current data also supports this viewpoint. Minister of Migration and Asylum Notis Mitarachi had said he expected around 1,000 people to be resettled in the new shelter on Sunday, but according to his Ministry’s press release, on the afternoon of the same day, only 300 asylum seekers had entered the new facility.

According to local media, as of Monday morning just 550 people had entered in total.

Therefore, two days after the launch of the new camp, only 4.4% of the people who have spent almost a week on the streets showed interest in moving to the “safety” that the Greek government has promised them. Although Afghans represent over 70% of the total population, no more than 15 Afghan families had entered the new facility as of Sunday afternoon.

In the meantime, government officials have been urging the community representatives to persuade their compatriots to enter the new facility. In some cases, according to multiple sources within the communities, officials had escorted them to police stations in Mytilini “for a chat” and returned them to the separated space after the requests were made.

But it hasn’t paid off.

“For us, moving from one hell to another is no solution,” Abdi, a 33-year-old Somalian, said. After the fire, he has been sharing a tent with his compatriots in the area just under the burnt Moria camp. He came to Europe with his youngest sister ten months ago, he says, and he is still waiting for his asylum interview. 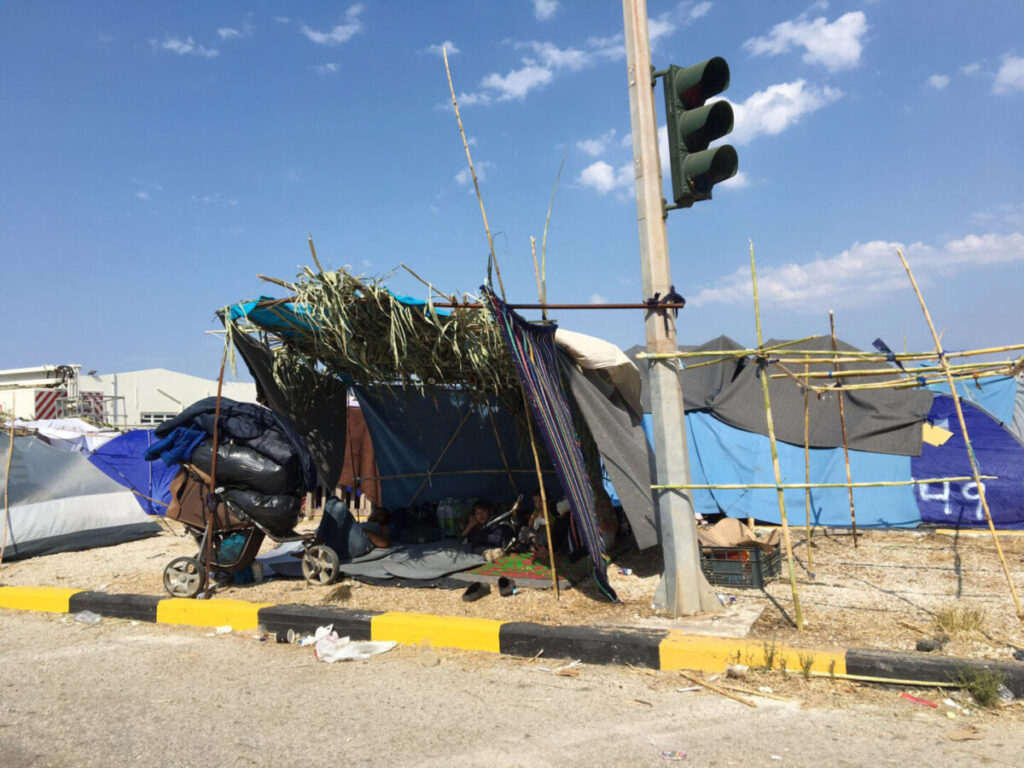 “After so much time being stuck on this island, people don’t want to stay in a camp which just has a different name, they want to move on to Europe,” he adds. “And for many of them, we know that if they are forced to live in a closed camp for more months, they will not accept it.”

Is COVID-19 actually a thing at Moria? During discussions among them, many asylum seekers support the view that it was a fabricated excuse, just so that the government would be able to keep them locked inside the camp.

In the days preceding the fire, 35 cases were identified at Moria camp. Initially managing to keep track of just seven of them after the fire, authorities have admitted they now have lost track of all of them.

Two of the detected cases were spotted again on Sunday, while entering the new camp, where asylum seekers are required to take a rapid test.

On the same afternoon, Prime Minister Kyriakos Mitsotakis talked about “dozens of positive cases” that had been detected in the area outside Kara Tepe, where the majority of the victims of the fire remain; but just around the same time, Minister of Migration and Asylum Notis Mitarachi said there were only seven detected cases.

The number of identified cases entering the new camp has reached 14 up to this moment.

Subjected to poor hygienic conditions, there are concerns for the asylum seekers that choose to remain in the open. Police checkpoints on each side of the coastal road, on which their presence is limited, prevent others from moving in and out, and the victims’ endurance is tested by hunger, thirst, the heat, and lack of access to basic medical supplies. 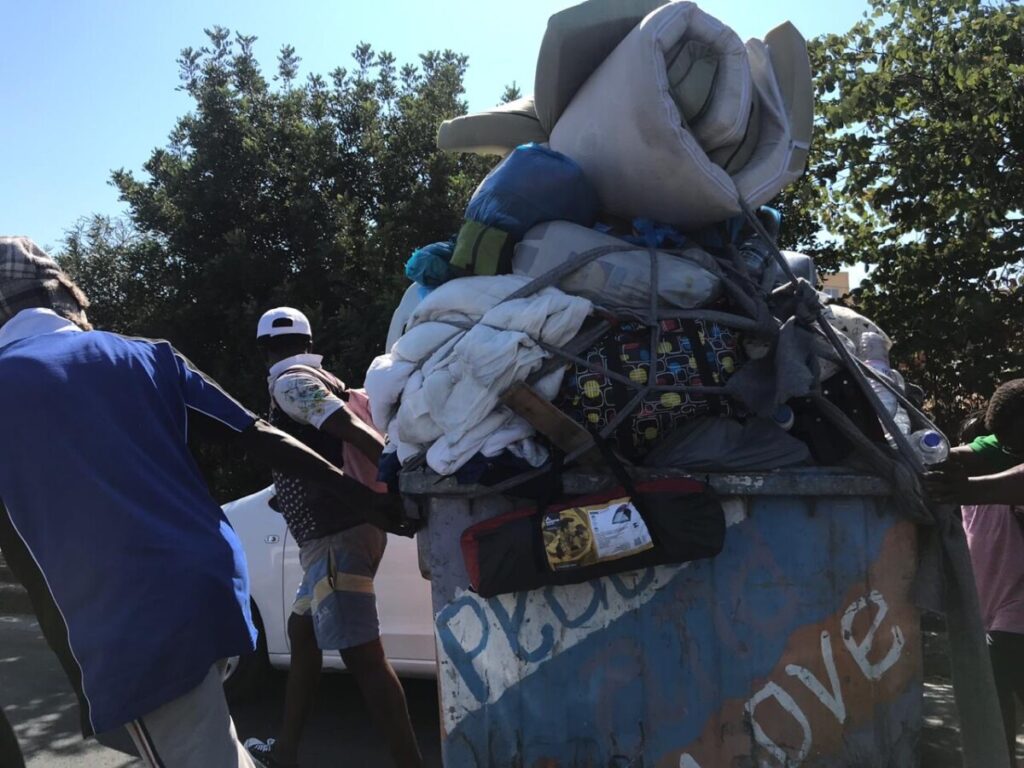 Waste bins piled high with blankets, mattresses and other personal items that people saved from the Moria camp fires. 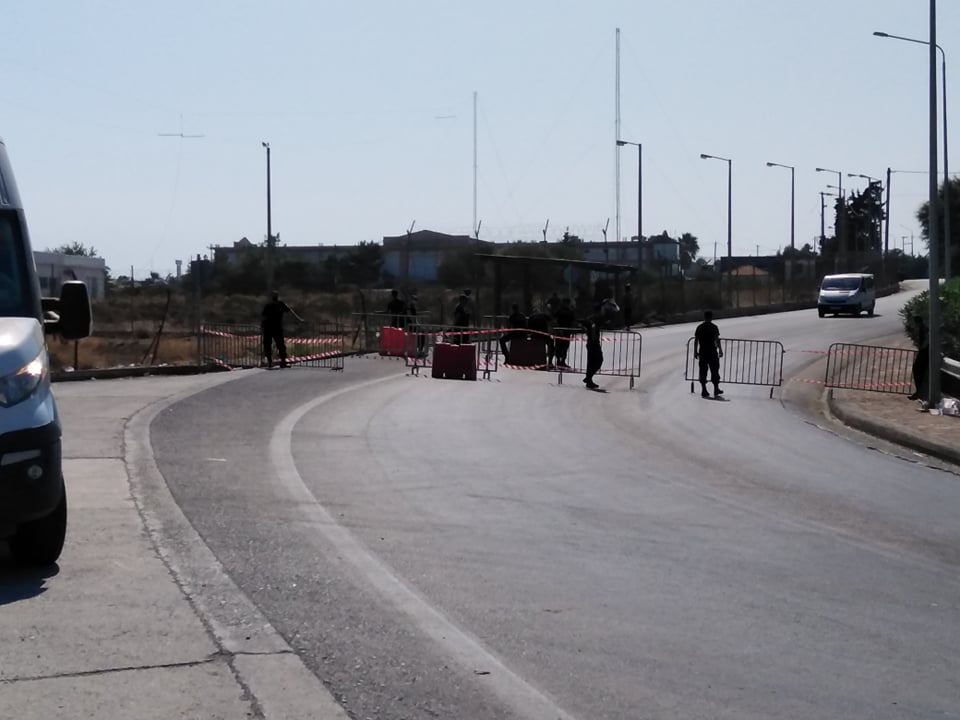 Police checkpoints on the coastal street monitor the movement of people.

Yet they remain, and they depend on the generosity of people outside of the separated space, that sometimes manage to sneak in. Shortly after I said goodbye to Zirwan, in an area where people gathered reeds to use for building shelters and tents, I ran into Fahim.

Fahim is an asylum seeker living in an ESTIA apartment in Mytilini with his family, so normally he should not have been allowed to enter this separated space.

“You know, today I fulfilled a very important task,” he says, when we exit the police checkpoints together. “People have been begging us to bring them things. Food, sleeping bags, cigarettes. A woman called me yesterday to ask me to bring her pads for her period. She was very embarrassed to ask this of me, but she had to, because she was bleeding.”

Until now, Fahim says, he hasn’t been able to bring the people all of the items that they have requested. “But I knew I had to get myself in here this time.”