They flee their countries because of violence and persecution. Once in Europe, they face discrimination again. “We have been repeating that for years: the camps are not a safe place for LGBTQI+ asylum seekers.”
/ Ula Idzikowska
August 19, 2021 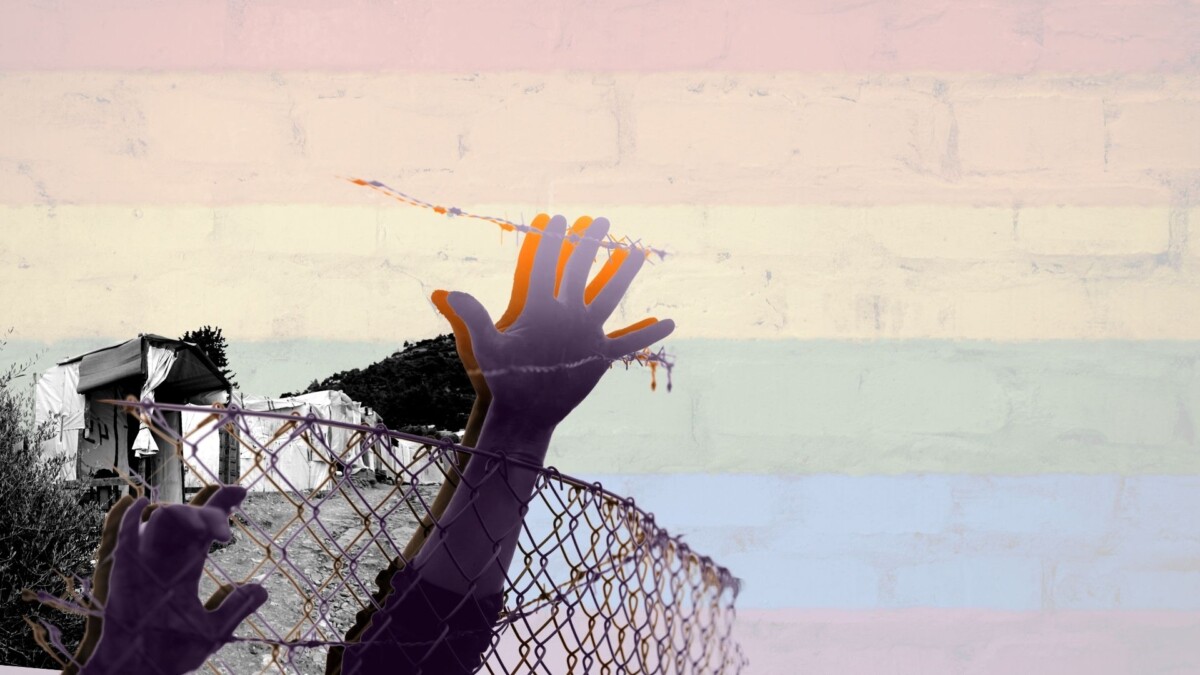 Liliane came to the Greek island of Samos alone. In the refugee camp in Vathy, she met a Congolese woman who offered her shelter in her tent for 30 euros a month. “At the beginning, everything went well until the day when she asked me why I left my country. I told her that I was homosexual and that if I stayed in Cameroon, they would kill me. She was very angry and started to insult me and chased me out of her tent. I was humiliated and rejected, and it was not finished, she went to tell almost all the camp that I was a lesbian. I was insulted everywhere, I couldn’t go out anymore, nor go to get food, I was afraid of everyone’s looks”, the Cameroonian refugee told the NGO Are You Syrious?.

There is no privacy in the refugee camp. It is almost impossible to keep your sexual orientation a secret. “People get caught while they are holding each others’ hands in the tent. Or phones with intimate pictures get stolen. Most of the time those people are being outed and face harassment,” says Dan Chapman, coordinator of the safe space for the LGBTQI+ community on Samos.

“Some people just look queer and will be discriminated against. Some people go to extremes to hide their identity: one guy posts pictures with a woman on Instagram and Facebook. As a decoy. He does it every single day.”

At one point, Liliane shared her story with a doctor from a medical NGO. She trusted her because she had seen LGBTQI+ brochures in the waiting area. The accompanying poster, in various languages ​​and with the island of Samos in rainbow colors, can be found at several NGOs on Samos.

The doctor referred Liliane to a lawyer and advised her to join the LGBTQI+ support group. It was founded in September 2019 by a number of LGBTQI+ volunteers for NGO Samos Volunteers. “When we started the project, we expected a small group of 20 to 30 people,” says Chapman. “But in those two years, we supported more than 120 people. Now we have 60 active members and new ones are joining constantly.” Liliane found a safe space where she could talk about everything without fear of being stigmatized or rejected. She participated in workshops about pride and mental health care. It helped her regain confidence and realize that there was nothing wrong with her. But it did not take long before her world collapsed again when she was raped by two men. “I was in a state of depression, I consumed enough alcohol to chase away the feelings of fear and shame because once again I had been humiliated. I didn’t know what to do anymore.”

Liliane is not the only survivor of sexual violence against lesbians. According to Chapman, some men consider raping a way to “cure a person from being a lesbian”.

Almost every LGBTQI+ asylum seeker in Samos struggles with mental health issues, says Chapman. “They have depression, trouble with sleeping, nightmares, flashbacks, and suicidal thoughts. This is mainly due to the situation here. Many lost hope because their asylum applications were rejected. They fear that they will be killed if they come back to their countries.”

In Somalia, South Sudan, Mauritania, and Nigeria, LGBTQI+ individuals face the death penalty for same-sex intercourse. In Uganda, Tanzania, and Sierra Leone – life imprisonment. In Nigeria, it is even forbidden to support LGBTQI+ people. Anyone who does it or witnesses any form of “non-conforming and homosexual activity” faces up to 10 years in prison. The police also crackdown on the LGBTQI+ community.

In May, two transgender women were sentenced to five years in prison for “attempting homosexuality” and “insulting public decency” in Cameroon. It concerns YouTuber Shakiro, who highlights the problems of the Cameroonian LGBTQI+ community, and her friend Patricia.

Since February this year, Cameroonian security forces have arbitrarily arrested, beaten, or threatened at least 24 people for alleged consensual same-sex conduct or gender nonconformity, reported Human Rights Watch in April. According to the organization “the recent accounts of abuse documented here seem to be part of an overall uptick in police action against LGBT people in Cameroon.” 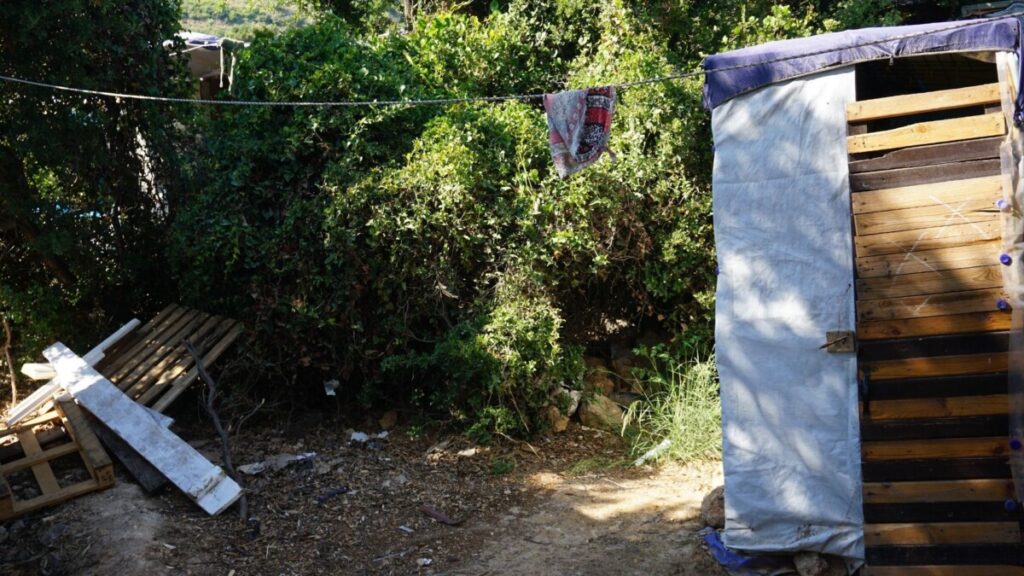 In Ghana, the first LGBTQI+ community center and a safe space were opened in January. But not for long: they had to close their doors after a month because of protests. According to Ghanaian sociologist Anima Adjepong, homophobia in Ghana is fuelled by a disinformation campaign of the government, religious institutions, and the media.

The support group on Samos also has to meet in secret. “A similar support group was infiltrated in Lesvos. They had to look for another location,” says Chapman. “We have been lucky so far, but we remain extremely cautious. You can only become a member after a referral from an NGO. This is how we can estimate whether somebody’s interest is genuine or a person just wants to cause problems.”

Each member is obliged to follow strict rules: it is not allowed to tell anyone outside the group that it exists or reveal the identities of its members. All communication takes place through Signal, a secure messaging app.

“Difficult to make a puzzle”

Liliane was no longer able to visit her psychologist due to the outbreak of the pandemic. Phone sessions were not enough. Every day was a challenge. A psychiatric intervention turned out to be necessary. Liliane took antidepressants to overcome the difficult period.

A recent survey carried out by Samos Volunteers confirmed that mental health issues of the LGBTQI+ community in Samos were further exacerbated by lockdowns. Three-quarters of the members indicated that their mental well-being has deteriorated. Almost 70% experienced more day-to-day discrimination. “People are afraid to queue in the food line. Stones are thrown at them and they are being insulted,” says Chapman. “They hoped to be safe in Europe but once they arrive they still live in constant fear.”

It has a negative impact on the asylum procedure, explains Chapman. “Traumatized people experience difficulties telling a coherent story. Compare it to making a puzzle. If you feel well, you can tell what happened to you – you already made your jigsaw. But if you are traumatized, the pieces just don’t fall into place. You can contradict yourself. That gives the authorities the impression that you are lying.”

Chapman fears that the difficulties LGBTQI+ people are facing will only increase after the transfer to the new camp in the middle of nowhere. “There will be more discrimination due to additional restrictions and isolation. How can you escape violence when you are confined to a container with six people? We have been saying for years that the camps are not a safe place for LGBTQI+ asylum seekers.”

Not vulnerable enough according to Europe

Queer identity and post-traumatic stress disorder (PTSD) are not considered as vulnerability criterium during the asylum procedure. A Directive from 2013 sums up vulnerable groups among asylum seekers: “minors, unaccompanied minors, disabled people, elderly people, pregnant women, single parents with minor children, victims of human trafficking, persons with serious illnesses, persons with mental disorders and persons who have been subjected to torture, rape or other serious forms of psychological, physical or sexual violence, such as victims of female genital mutilation.”

The list of safe countries used in the asylum procedure in Greece includes a number of countries where LGBTQI+ persons are criminalized, such as Ghana, Senegal, or The Gambia.

Greece introduced changes to the immigration law in 2020 – both severely restricting the rights of LGBTQI+ asylum seekers, according to the annual report of the international emancipation organization ILGA-Europe. “Times for reviewing an application and appeal procedures have both been reduced. Both are worrisome, as LGBTQI+ asylum seekers often need additional attention in the application phase.”

*This article was written with the support of the Pascal Decroos / European Journalism Fund.