"Which government, which country, which policy, what person has the right to deprive Saad of his dreams?"
by Anna Maria Palivou
July 27, 2020 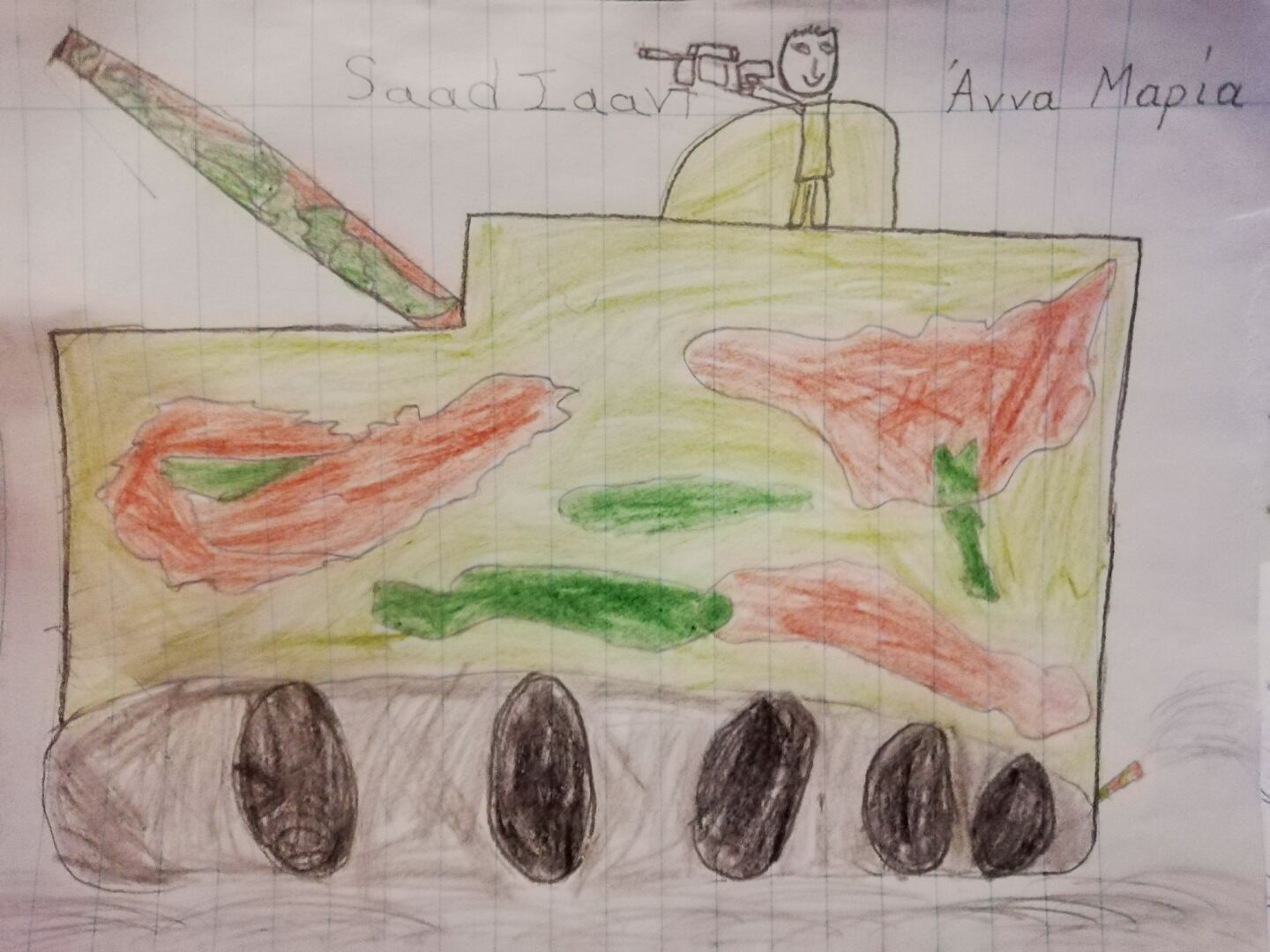 The past, the present, and the future depicted in a drawing by young Saad from Syria
"Which government, which country, which policy, what person has the right to deprive Saad of his dreams?"

July 27, 2020

by Anna Maria Palivou

Seven-year-old Saad arrived on Leros a year ago, with his family, from Syria. On June 17, Saad gave me a drawing – one that I should never forget.

He didn’t have any suitcases, he had only a few things with him; small but important things which he managed to find along the way, on his long journey. Since 2015, we have met many like him. The story of little Saad, a student at LEDU, an educational space for refugee and migrant children on Leros, is so similar but also so different than all the other stories I have come to know.

He traveled with his siblings to escape the brutality of war and they made it. He managed to reach a country that would embrace him, and allow him to sleep peacefully at night. And who would not have embraced such an innocent soul, a child-hero, who managed to escape, and tries every day to achieve his dreams?

Saad speaks and understands Greek well. There are few children of his age who manage to learn the Greek alphabet, but he and his sisters have achieved excellence in all their new learning endeavors.

His older sister wants to become a doctor. I would feel really lucky to be in the hands of such a responsible and smart doctor, as I’m sure she will become. And she has all the qualifications to achieve this dream – all she needs is a quiet place to study.

She found this quiet place in Greece and her family strongly support her. In Syria, power outages did not allow her or her siblings, who love school so much, to study.

Saad’s younger sister is the best student at the school, she has impressed everyone with her perseverance and willingness to learn. When her mother visited our school to learn about her children’s progress, we were all proud and amazed at her young daughter’s accomplishments. Then she confessed to me… “When we left, the only thing she took with her was her notebook from school, she loved it very much, there was no way she could leave it behind.”

The situation today is very different than when Saad’s family first arrived in Greece. Now, all their friends and fellow travelers have heard the bad news about the so-called “closure” of the ESTIA housing program. The new conditions and measures are a very unpleasant and stressful surprise for travelers and their families.

Many of Saad’s friends ended up homeless immediately after their status was officially recognized, while several of the families are looking for alternative plans for the future. The squares of Athens are filled with officially-recognized refugee families who are now homeless, and the news that reaches Leros is disappointing. What goes through the mind of a seven-year-old when it has to process so much information? At the age of seven, Saad should be thinking about what he wants to be when he grows up – but he worries about where and if he will grow up.

Little Saad’s drawing communicated all these numerous and confused thoughts. A smiling soldier, on an imposing tank, mirrored the mind of a boy who had to grow up too soon.

One could say that, after so many years of working with refugees, we should have become accustomed to seeing children’s drawings that capture everything we cannot bear to see.

Drawings depicting people with life jackets in vast seas, people stacked in torn boats, and soldiers so effortlessly aiming their weapons at children. And yet, consciousness must not become accustomed to human suffering, and must assert the dreams of every little Saad. Every child’s drawings should be happy, filled with houses, trees, and carefree children picking flowers.

At his age, at this time of year, my family and I would be preparing for a trip and, if it was a small trip, I would be upset and sometimes cry. Saad is also preparing for another trip with his family, but he would have preferred to never have to take this trip, or for it to last only a moment – a tiny moment that will pass like lightning.

The change in the mood of young Saad at school, and his family’s, is now obvious. Discussions about homelessness and their status being rejected have become commonplace for Saad’s family. Their friends, who used to live in the neighboring container, are now homeless. Homeless refugees, without financial or social assistance, and yet they are the lucky ones.

The others, Saad’s unlucky neighbors, are preparing for the return trip. A journey where the smiling soldier in the drawing has the power to come to life, and the big vehicle can now make a loud noise, and will not allow the children sleep and study.

And what about Saad’s past haunting his future, which comes to life through his drawing? Saad is not a refugee, that’s what they’ve been told…

And while the government is reassuring about the declining refugee population on the islands, citing statistics which praise their commendable work, I wonder.

Where are all these numbers today and what do they represent? Does everyone realize that these statistics represent human souls? If they are souls, are we reassured because we know they’re safe, or because our image as a tourist destination looks shinier? Which government, which country, which policy, what person has the right to deprive Saad of his dreams?

The homeless population is increasing, the number of those who get rejected is growing. And Saad –his dreams should be coming into focus, instead they are drifting away.

* Anna Maria Palivou is the coordinator of the LEDU non-formal education center on Leros, by the non-governmental organization ARSIS (Association for the Social Support of Youth). 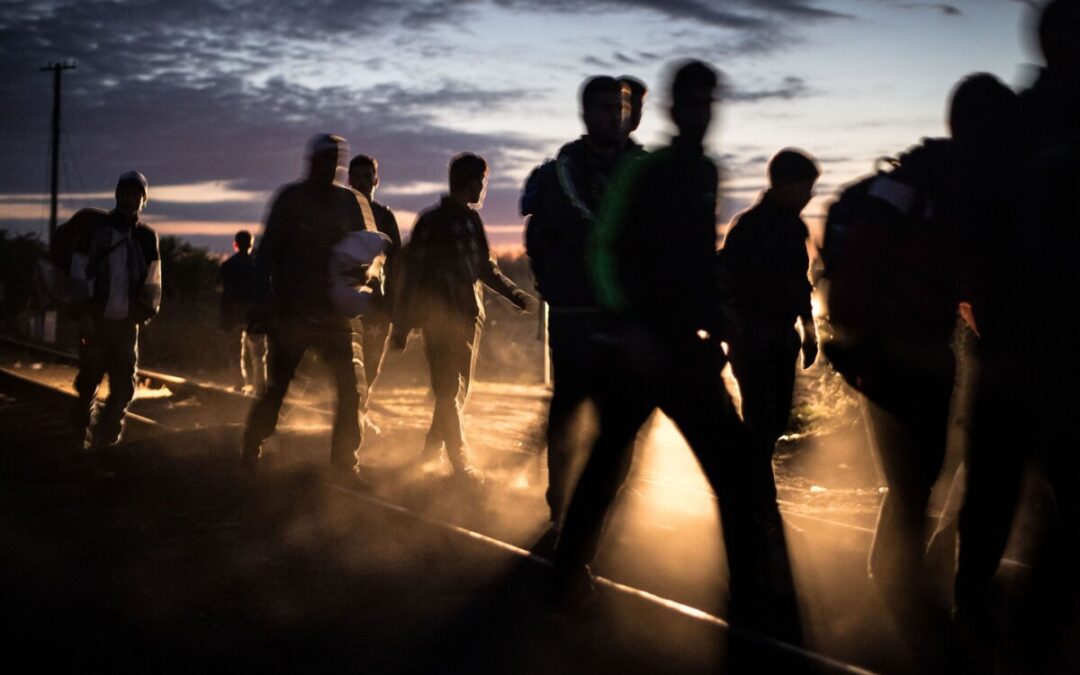