In a closed-door Parliamentary meeting, the head of Greece’s National Intelligence Service reportedly confirmed that two journalists had been under surveillance, including Solomon's Stavros Malichudis. A few months ago, Minister of State Giorgos Gerapetritis had repeatedly affirmed that “it is self-evident that there is no surveillance of journalists in Greece.”
/ Iliana Papangeli , Stavros Malichudis
August 3, 2022

On Thursday, July 29, 2022, the Greek Parliament’s Committee of Institutions and Transparency held a meeting regarding the surveillance of journalists and politicians, following the discovery that there was an attempt to infect the mobile phone of Nikos Androulakis, (president of opposition party PASOK-KINAL and member of the European Parliament), with the illegal surveillance spyware Predator.

Summoned to attend the closed-door meeting were the director of Greece’s National Intelligence Service (EYP), Panagiotis Kontoleon, and the president of the Hellenic Authority for Communication Security (ADAE), Christos Rammos.

Therefore, the public was only informed about what took place during the closed meeting through leaks which began as soon as the meeting ended. From what has become known, it appears that during the meeting, not only did Kontoleon offer insufficient explanations, but regarding the documented cases of the surveillance of journalists Stavros Malichudis and Thanasis Koukakis, Kontoleon floundered and responded with contradictions and inaccuracies, which deconstruct what the government has previously maintained.

Thus, we consider it necessary to inform Solomon’s readers and our community (which support our work), about the developments in our colleague’s surveillance case − in which we submitted a legal complaint to the Supreme Court in February 2022.

[Thanasis Koukakis’ comments regarding the claims made by the director of EYP about his own surveillance are available here.]

EYP’s surveillance of Malichudis and Solomon

We remind readers that on November 13, 2021, an article in the newspaper Efimerida ton Syndakton revealed an internal document from EYP in which reference was made to Solomon and to Solomon journalist Stavros Malichudis.

The internal document cited information from a “highly credible source” (internal jargon referring to phone monitoring) regarding an article that Solomon was preparing about the story of Jamal, a 12-year-old Syrian refugee who was being held at a detention center on the island of Kos.

EYP asked its officials to gather information regarding the source that Malichudis was in contact with (for the purposes of the article), and information on the 12-year-old refugee himself.

From EYP’s internal document it can be discerned that the surveillance occurred during the spring of 2021.

Reactions and the Minister of State’s contradictions

The news of the Malichudis-Solomon surveillance was covered extensively by the foreign press (Deutsche Welle, Al Jazeera, Libération, Columbia Journalism Review, ARTE), but was only considered newsworthy by a handful of media outlets in Greece.

Announcements about the issue were made by the Journalists’ Union of Athens Daily Newspapers, the Foreign Press Association of Greece, and the European Federation of Journalists. In Parliament, SYRIZA MPs and the head of KINAL’s Civil Protection Department, Giorgos Kaminis, demanded explanations. In addition, SYRIZA’s MEP, Stelios Kouloglou, raised the question to the European Parliament.

At the time the surveillance was discovered, our colleague was also working for the Agence France-Presse (AFP). In a statement dated November 24, 2021, (in response to a letter from AFP), Giorgos Gerapetritis, Minister of State, emphasized that “Greece fully adheres to the values of democratic society and rule of law, especially pluralism and freedom of the press. Accordingly, it is self-evident that there is no surveillance of journalists in Greece. I assure you that the same is true also for Mr. Malichudis, and therefore, there is no need for further action in this respect.”

Since Gerapetritis’ answer did not seem convincing, on December 17, 2021, he replied to a new letter from the AFP.

In AFP’s correspondence regarding the surveillance of its employee, the Minister of State made an extensive reference to the current government’s commitment to the protection of press freedom and its effectiveness in combating SYRIZA’s populism and the condemnation of far-right group Golden Dawn (!) and repeated that in Greece, surveillance of journalists does not occur.

“For the avoidance of any doubt,” assured Gerapetritis, and the government itself would find it “unacceptable” if such a thing had occurred. 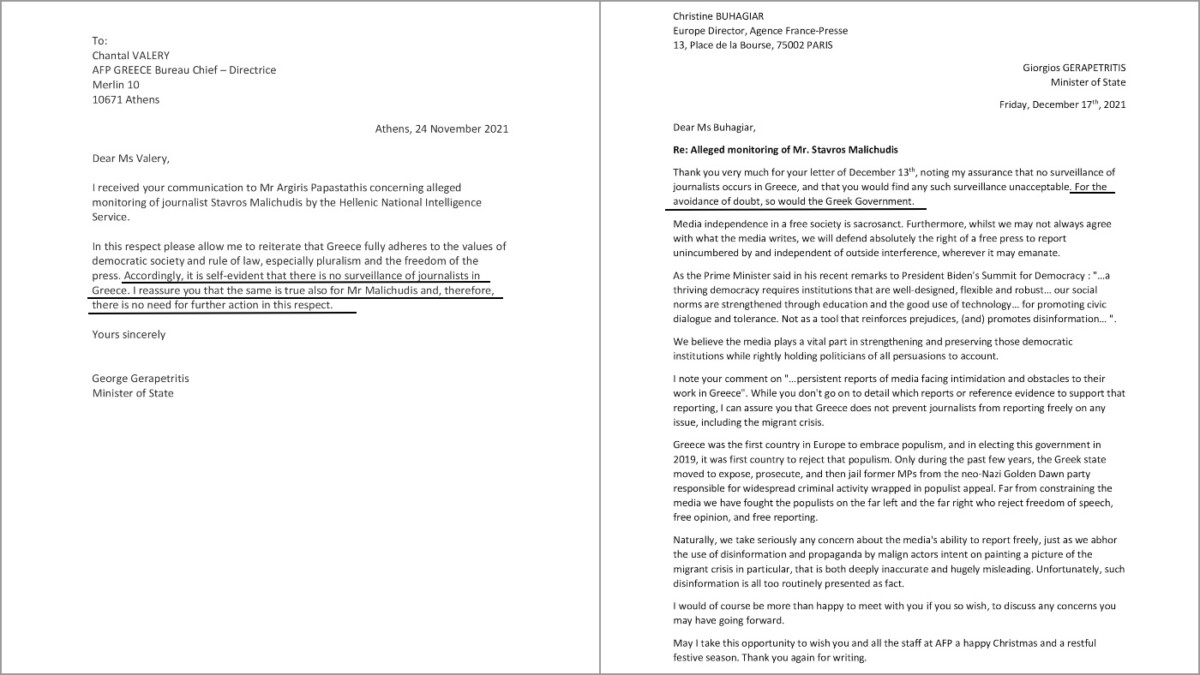 However, in neither of his two letters did Gerapetritis deny the authenticity of EYP’s internal document which proves that the surveillance, in fact, occurred.

[Also note that a related letter from Solomon, dated November 29, 2021, to the Prime Minister’s office, did not receive a reply.]

In the months that followed, inside story and Reporters United revealed the case of the surveillance of another journalist, Thanasis Koukakis, who specializes in financial reporting, works with international media, and has written revealing reports about Piraeus Bank, among other things.

In a series of publications, the two media outlets have revealed highly important aspects surrounding the monitoring of Koukakis:

Under pressure from the opposition, the press, and international journalists’ unions, and despite the evidence that underlined EYP’s involvement, the government tried to attribute the monitoring of Koukakis to “private individuals”.

Until, on July 26, 2022, the president of PASOK-KINAL, Nikos Androulakis, filed a complaint with the Supreme Court’s prosecutor’s office regarding an attempt to tap and monitor his mobile phone with the Predator malware.

Surveillance for the purpose of “national security”

Institutions and Transparency Committee, SYRIZA MP, Giorgos Katrougalos, referred to the newspaper Efimerida ton Syndakton which revealed that Solomon was being monitored in the context of the article about Jamal, a 12-year-old Syrian refugee, as well as the monitoring of lawyers active in refugee issues, and called on EYP’s director to explain how this instance of the declassification of communications can be justified.

EYP’s director appears to have attributed the specific monitoring to being an issue of “national security”, relating to the “hybrid war” of Evros, as he characterized the events of March 2020, and the fire which destroyed the Moria camp on Lesvos.

Thus, while a few months ago, Giorgos Gerapetritis categorically denied that Solomon was monitored, today the director of EYP is reportedly confirming it. So, can a journalist be monitored for the purpose of gathering national security information? And if so, isn’t this a threat and a violation of press freedom, and the protection of its sources?

Based on the response by EYP’s director, it seems that journalists can be monitored.

There is, however, one more crucial point that emerges: from EYP’s internal document, it is clear that the interest of the agency did not concern information that might be related to what Kontoleon claimed, but focused on issues related to the journalistic investigation.

In the internal document, reference was made to what a specific report, which our colleague was working on, was about, and to sources that EYP officials believed he was in contact with for purposes of said report.

So how does the gathering of this type of information, which is solely related to investigative journalism, relate to national security? And who ends up with the information that a journalist has investigated?

On February 22, 2022, Solomon proceeded to file a legal complaint (file number 1862) with the prosecutor of the Supreme Court through our attorney, Dimitris Georgakopoulos.

We requested, among other things, an investigation into the possibility that EYP officials have breached the confidentiality of telephone communications and have unlawfully gathered personal data, in the case of our colleague as well as for other citizens mentioned in the article by the newspaper Efimerida ton Syndakton.

In mid-June, the Criminal Court of Athens (Preliminary Proceedings Department) presided by Christina Zeriti, called us to testify, and we were asked to provide evidence in support of our legal complaint.

In mid-June, the Criminal Court of Athens (Preliminary Proceedings Department) presided by Christina Zeriti, called us to testify, and we were asked to provide evidence in support of our legal complaint.

We submitted what we know about the case, additionally presenting the reports by Reporters United and Inside Stories regarding EYP’s surveillance of Thanasis Koukakis and the subsequent infection of his mobile phone with the Predator malware, which in the meantime, had become public knowledge.
We believe that the recorded monitoring of journalists who cover two such different fields should cause concern, as to how widespread the phenomenon of monitoring journalists may be in Greece.

Also called to testify was the journalist Dimitris Terzis of the newspaper Efimerida ton Syndakton − who had revealed, among other things, the surveillance of Malichudis and Solomon and EYP’s internal document which was related to our case.

The competent, independent Authorities are “incompetent”

The legal complaint which we submitted on February 22, 2022, was also sent to the Prime Minister’s office, the opposition, the Ministries of Justice, Interior, Digital Governance, Citizen Protection, Migration & Asylum, as well as to the Hellenic Data Protection Authority (DPA), the Hellenic Authority for Communication Security and Privacy (ADAE), the National Committee for Telecommunications and Post (EETT), the Ombudsman, and the head of the Athens District Attorney’s Office.

From the responses we have received until now, five months later, we can conclude that the competent authorities are incompetent (we have not yet received a response from the DPA).

The Ombudsman is the only authority that replied to us in writing. In the reply we received on March 4, 2022, it is noted that the Ombudsman’s intervention is not possible as “EYP does not fall under our jurisdiction”.

EETT informed us verbally that the case is outside of its jurisdiction and informed us that it does not intend to respond in writing to our request.

ADAE is, by law, the most competent Authority for cases like ours, which concern violations of citizens’ private communications. That is why, after all, the director of ADAE, Christos Rammos, was also present at the meeting of the Parliament’s Committee of Institutions and Transparency.

Months ago, however, the ADAE verbally informed us that the file remains open, but the Authority’s position is that the case does not fall within its jurisdiction.

Since the independent Authorities declare themselves incompetent to investigate such critical issues, the situation is now fully up to the Judiciary — in Greece and in Europe.