How important is it in journalism to revisit the same places as well as the stories that might have been already told?
/ Solomon
December 30, 2020 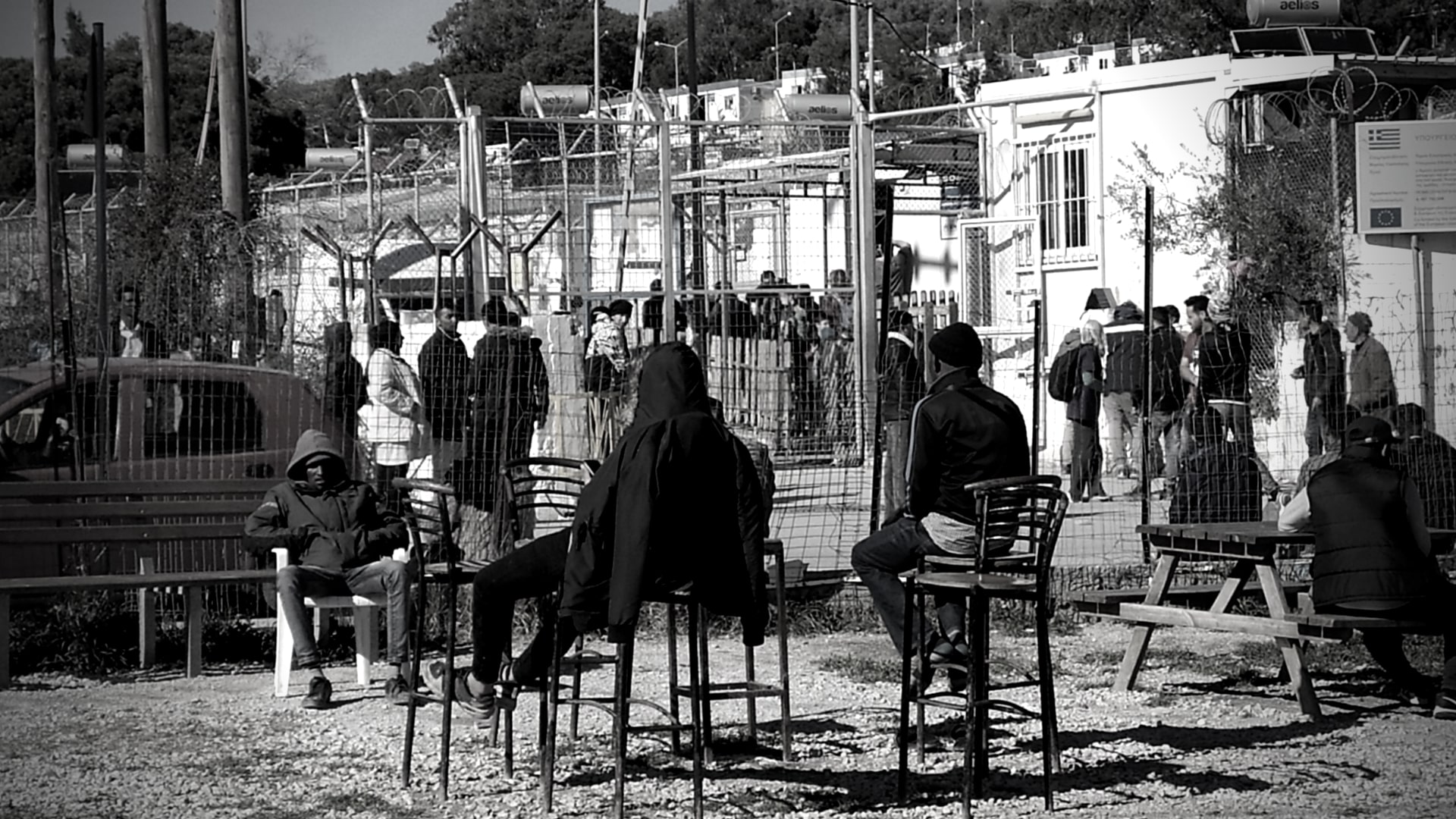 Our last flight of 2020 (or going back when everyone is gone)
How important is it in journalism to revisit the same places as well as the stories that might have been already told?
/ Solomon
December 30, 2020

On December 14th, while Greece was in the fifth week of quarantine as a result of the second wave of the COVID-19 pandemic, my colleague Stavros Malichudis and I were taking a flight from Athens International Airport Eleftherios Venizelos to Lesvos island.

We were at the airport early, but there were no queues to beat. The departure hall, the shops and restaurants, the security checkpoint; everything gave the eerie impression of a ghost airport.

While we waited for our flight to take off, I tried to recall the last time I traveled –  before the pandemic hit and radically changed the course of the year we are leaving behind, and the planning we had done. The last time I got on a plane was almost a year ago, in February, when I was waiting again for a flight to Lesvos with my colleague Stavros. It was preceded by a pretty busy period of continuous travelling: Hungary, Norway, Germany, Austria, Slovenia and the Balkans… and then the pandemic.

From the moment the opening of the gate was announced, it only took us a few minutes until we were in our seats with our seat belts fastened and the pilot was informing us that we’re ready for take off. Once again, we didn’t have to wait in line.

While I focus on controlling my fear of flying (breathing exercises), Stavros looked around at the passengers on board and told me that nothing resembles the flight he took to Lesvos on September 10, when he traveled to the island when the fire broke out at the Moria Reception and Identification Center, which completely destroyed the refugee camp. “That flight was like a press conference or a journalists’ reunion.”

An hour later, when the plane landed at the airport on Lesvos, I regained my self-control and started to notice everything happening around me. I observed the people, I listened to their conversations, and I assumed Stavros was right; there were no other journalists on this flight. In a way, it felt like we were going back when everyone else had already gone.

Following up with sources and remaining alert

How important is it in journalism to revisit the same places as well as the stories that might have been already told? After multiple fires destroyed Europe’s notorious refugee camp, news and information was rapidly circulated, in a flash. Like Stavros described, in the days that followed, planes landing at the small airport of the northern Aegean island were almost exclusively filled with reporters and photojournalists, assigned by the largest and other smaller media outlets from around the world to cover the events at Moria.

What is less often highlighted though, after the interest has waned and the lights are off, is the need to ask and find out “what happened next?” or “what is it that we didn’t say?”.

To my understanding, there were two factors that led to our latest story about the “missing” migrants.

The first one is very much related to the way we work with the people we encounter while we are reporting on migration and refugee issues, and who share their stories and experiences with us. Following these people might gradually give you a story that wouldn’t have made sense before.

And the second factor was Stavros being attentive and responsive to what was happening around him while he was there in the middle of the chaos that reigned. Sometimes it takes a moment to look around you and notice, for example, that even though the information you have is telling you that approximately 13,000 people reside at Moria, your eyes cannot lie to you and there is no chance that the numbers can be correct.

I invited Stavros to share some thoughts with you about how he worked alongside some great colleagues for this story. So here it is.

There are the kinds of stories that you start working on, knowing, more or less, beforehand what you are going to write about. For example, tensions in Moria camp remain a usual phenomenon, so you set off to write on the causes that allow this to happen.

On the other hand, there are the kinds of stories that are revealed to you gradually, such as our Moria’s “missing” migrants story, published earlier this month.

When, in spring, we had already started to meet asylum seekers from Moria camp, who were arriving in Athens although they were theoretically not allowed to do so, we didn’t yet have an idea that the different testimonies we were collecting would lead to an investigation several months later.

The angle of this piece established itself in September, when I travelled to Lesvos to report on the aftermath of the fire at Moria. When I ran into any colleagues or acquaintances along the coastal road (where thousands of the victims of the fire were camped out for five days), we would all make the same remark: “Okay”, we said to each other, “but this just can’t be 13,000 people” – the official number presented by the Greek authorities.

It was never a secret that people contained on the Aegean islands, who in theory must remain on the islands until their asylum claims were processed, found ways to reach the mainland and often cross into other EU countries too. People we talked to would always share stories of friends or ex-neighbors from the camp who had made their way to France, Germany, Switzerland or the Netherlands, and would confess that if they had to stay in the camp’s misery for much longer, they were considering doing the same.

In the camp’s small communities, it’s common knowledge that there are people who can modify your documents so that you will be “allowed” to leave the island and travel to the Greek mainland. During one of our interviews, here at Solomon’s office, one of our sources showed us how easily you could do it on your own – just like he did.

In reference to the “missing migrants”, minister of Migration & Asylum Notis Mitarachi implied that the migrants had “managed” to trick the authorities who checked documents and thus they boarded ferries to Piraeus, but the majority of our collected testimonies note that the authorities did not exactly make any great efforts to stop them.

Frankly stated: if the authorities wanted to prevent them from reaching the mainland, they could have done it. Humanitarian workers, other refugees, and even journalists knew that the asylum seekers were fabricating their documents; it is impossible that the Greek authorities did not know. 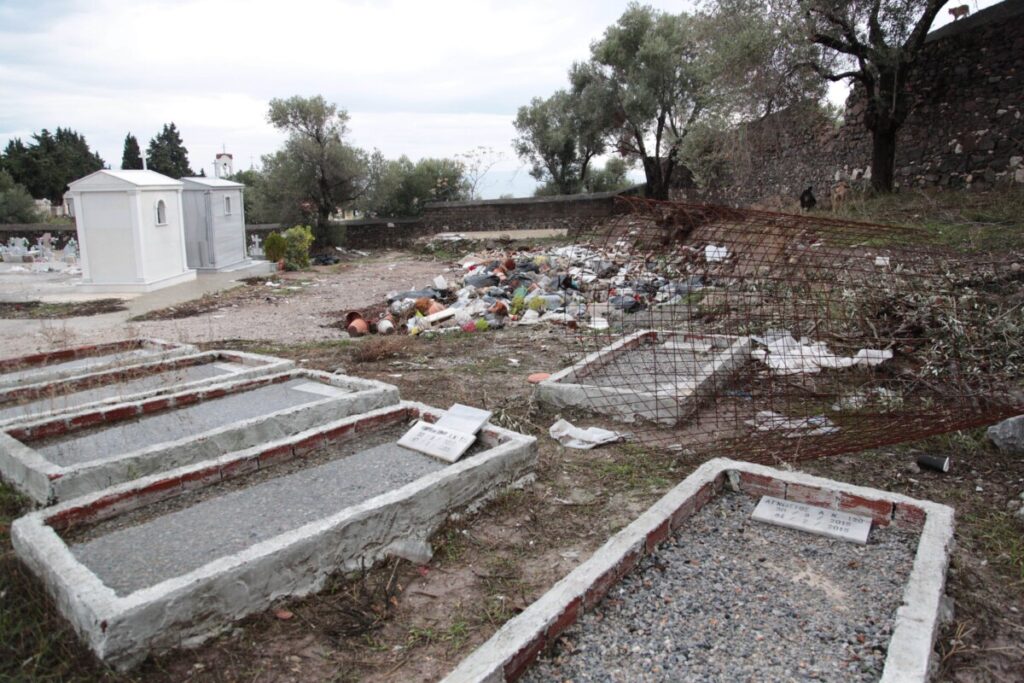 Graves of unidentified bodies in the cemetery of Agios Panteleimon, Mytilene. 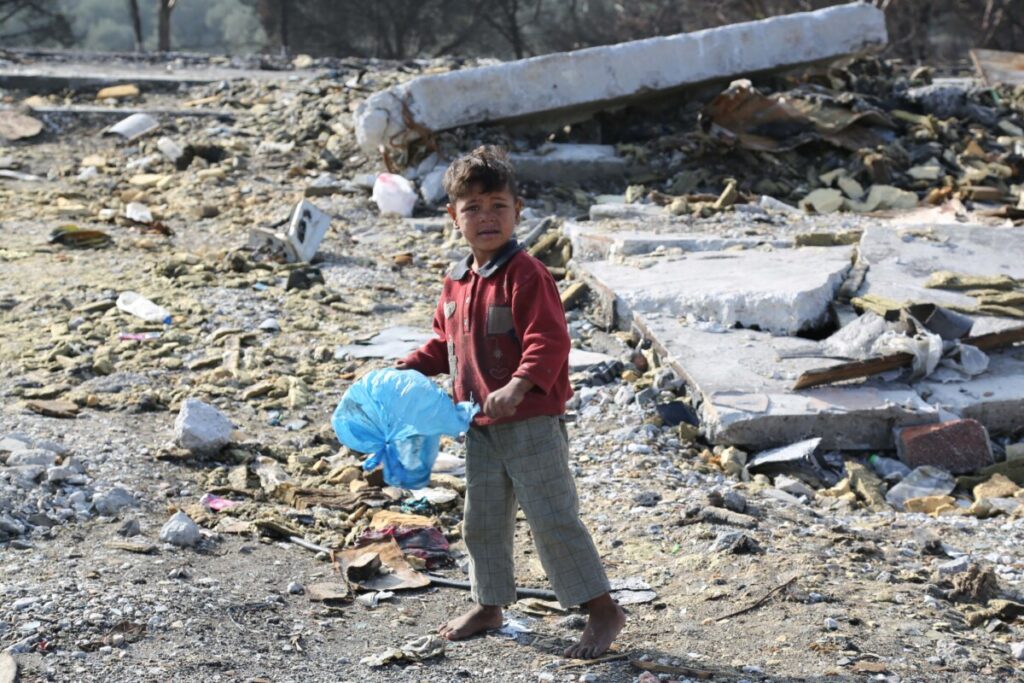 Roma child playing in the ruins of Moria refugee camp. 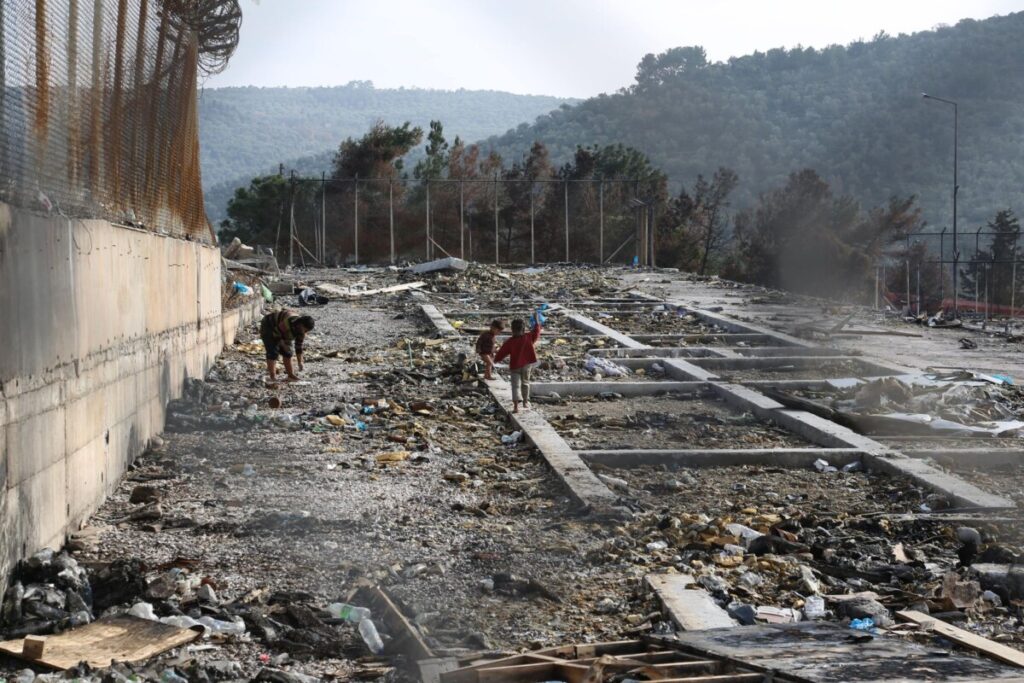 Roma family collecting aluminium and iron to sell to the local scrap dealer. Obviously frustrated, the mother of the two children is telling me that the Greek authorities do not allow them to go inside the former Reception and Identification Centre. 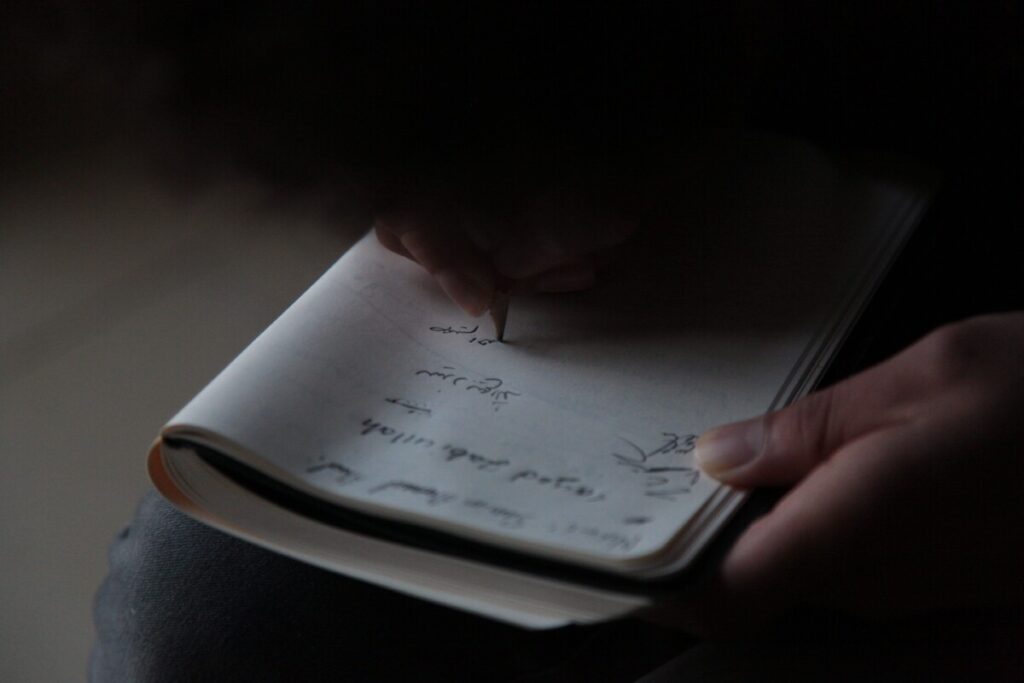 During an interview a young asylum seeker shows us how to spell his name in Dari.

Thanks, as always, for your support.
Wishing you all a happy holiday season and a much better 2021!

Until next time,
Iliana 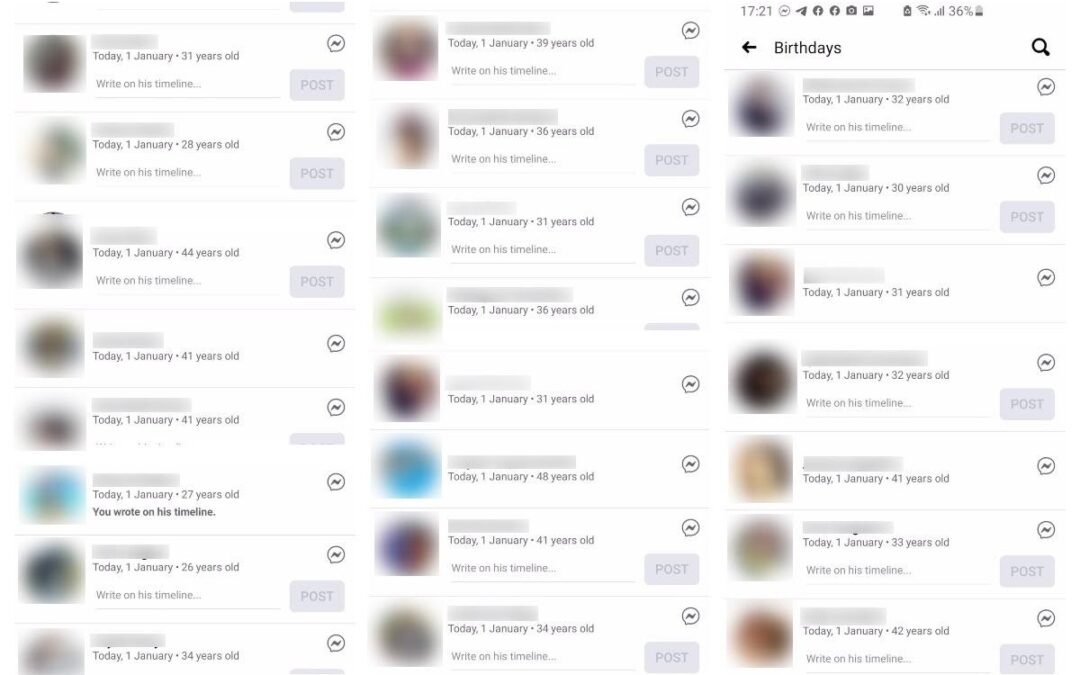 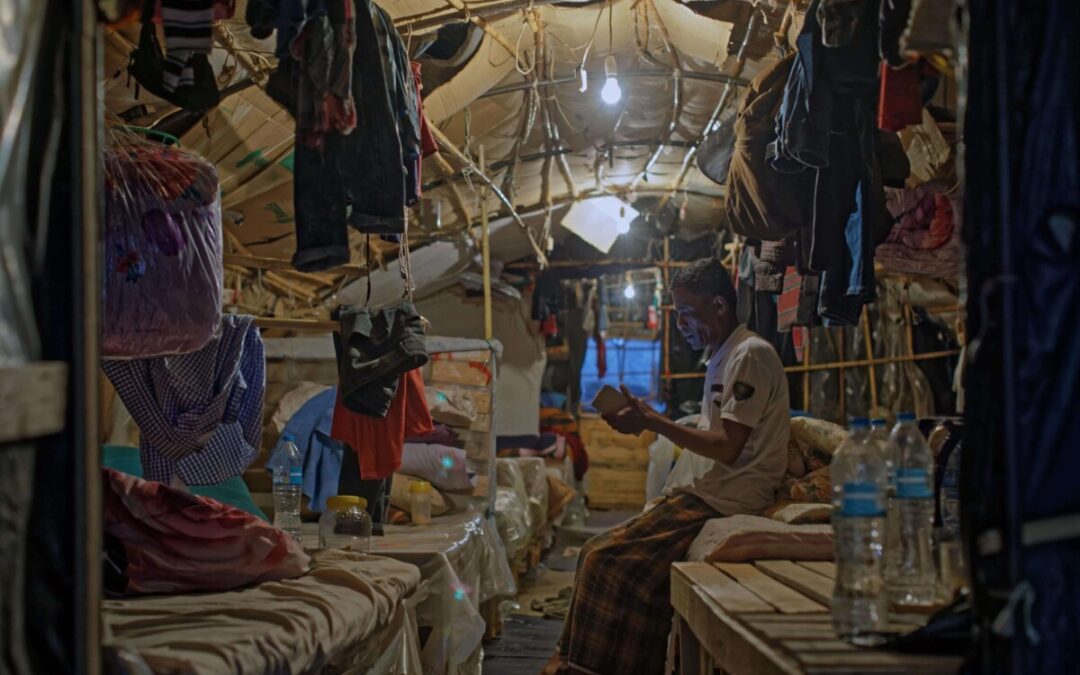 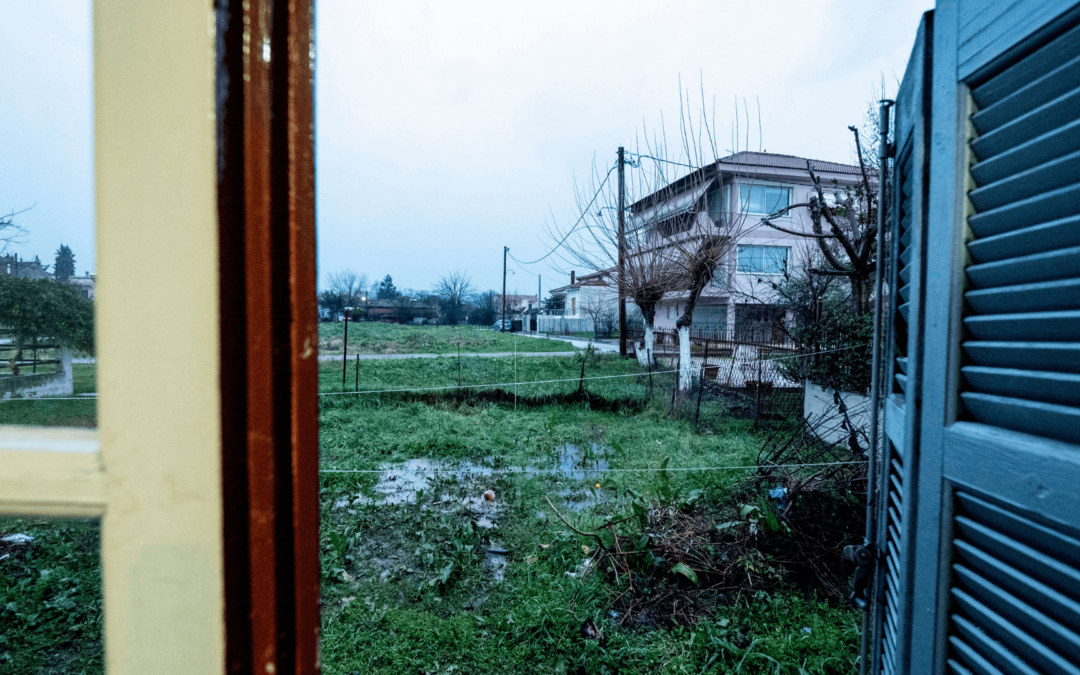