During her recent visit to Greece, European Commissioner for Home Affairs Ylva Johansson made assurances that new reception centers on the Aegean islands would not be closed facilities. However, the reconfiguration of existing camps on the mainland into closed facilities are progressing at a rapid pace − and the authorities involved are pointing fingers at each other.
/ Anastasia Misbach
May 10, 2021

“We call it ‘modernization’” – reception centers for migrants will be ‘closed’ facilities
During her recent visit to Greece, European Commissioner for Home Affairs Ylva Johansson made assurances that new reception centers on the Aegean islands would not be closed facilities. However, the reconfiguration of existing camps on the mainland into closed facilities are progressing at a rapid pace − and the authorities involved are pointing fingers at each other.
/ Anastasia Misbach
May 10, 2021

The Diavata Open Facility of First Reception for asylum seekers is located a few kilometers outside Diavata, just 20 minutes from Thessaloniki.

It stands as a daily reminder of an unstable European and Greek immigration policy; invisible to the rest of the world, this “warehouse of souls” has the capacity to house 1,057 people.

One of the residents of the facility is 20-year-old Denise, (real name not used), who is originally from Afghanistan and has lived at various refugee camps in recent years.

She traveled from Tehran to the camps in Turkey, where she had to make a decision about continuing her journey. She had three options, none which guaranteed her safety: return to her war-torn country, stay in Turkey and risk imprisonment, or attempt to make a difficult passage across the Aegean in an inflatable boat.

She chose the third option. Denise ended up at the Moria Reception and Identification Center (RIC) on Lesvos and from there she went to the Facility of Diavata, where she has been living for the past two years. It’s been five months since her first asylum interview, with the date of the decision still unknown.

Denise describes the camp as “a prison, the only difference is that criminals are alone in prison, and we are in small military bases with our families. At night, when I look beyond the barbed wire of the camp, I realize how different my life in here is from the lives of others out there. I can only look at the beauty of the city lights from afar without knowing how long I will remain here.”

“By raising a wall they’ve built a prison for us”

But something has been changing. In recent weeks, the facility where Denise lives has been surrounded by the sound of bulldozers and cranes. A three-meter-high concrete wall is being constructed around the perimeter of the facility. 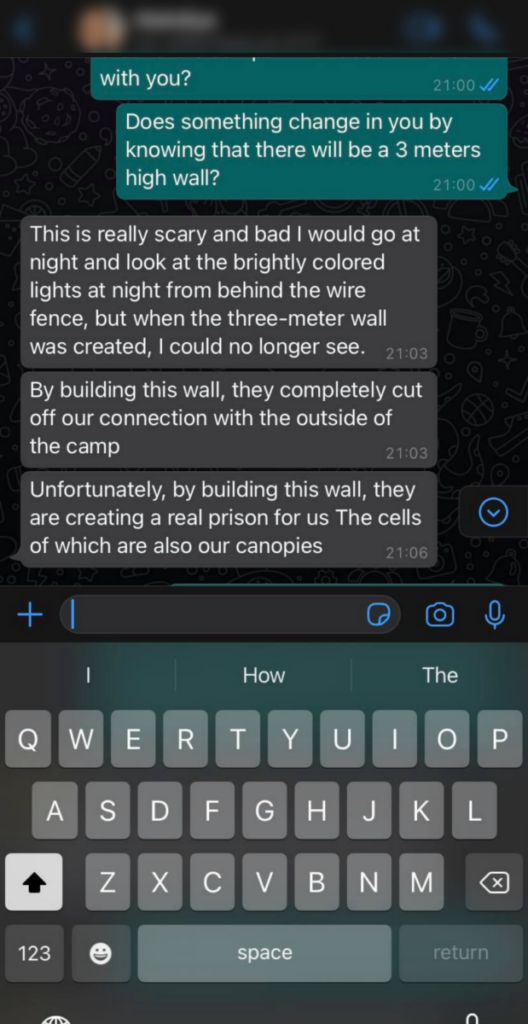 Denise shared her thoughts with us as she watched laborers hastily working to construct the emblematic division of “modern” societies. “By building this wall, they’re completely cutting off our connection to the outside world. It’s really scary and bad,” she said.

At night, beyond the wire fence, she often gazes at the bright lights of the city. “Once the wall is up, I will no longer be able to see anything. By building this wall, they’re creating a real prison for us, our shelters will become jail cells.”

“Modernizing” the facilities with walls

Solomon contacted the Ministry of Migration and Asylum in regards to the walls being built at Diavata and also at the facilities of Malakasa, Ritsona, and Polykastro.

During a telephone conversation with the Ministry, they underscored that “we call it modernization”. 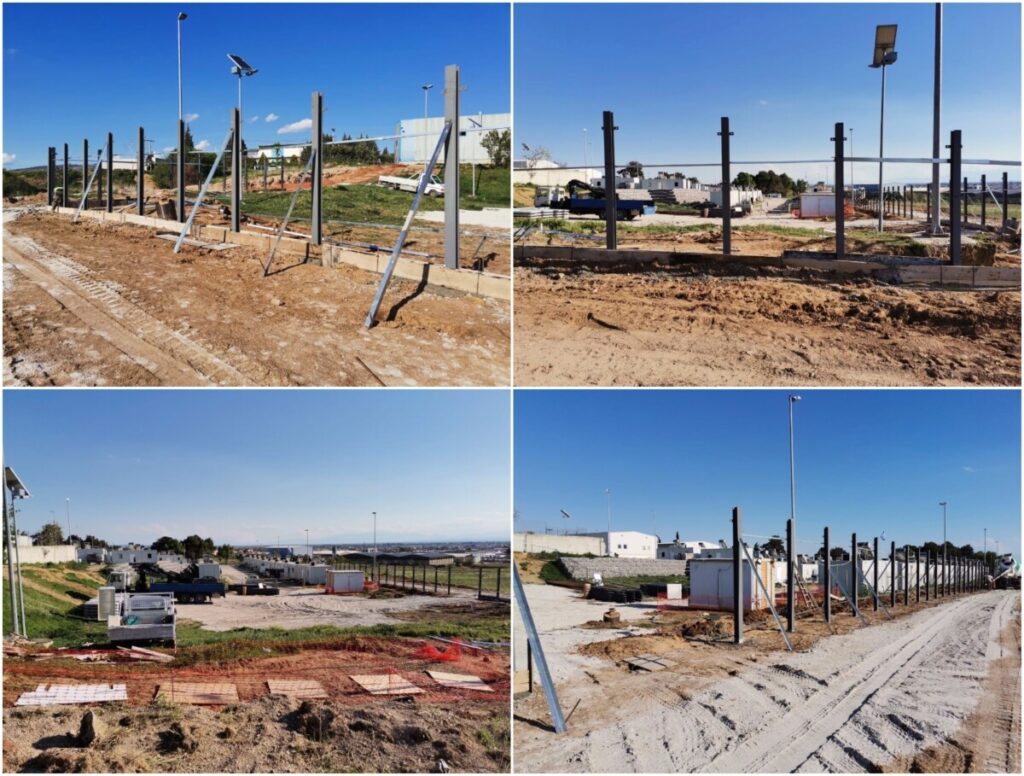 Kabourakis referred to a plan for transforming the current facilities into “closed and contained” and argued that the reason for creating the wall is “to strengthen the sense of security for all involved, both local communities and camp residents. No one will be able to enter or leave,” he said.

It is a fact − throughout the years of the facility’s operation, the safety of its residents has often been called into question. Not only because of incidents among the asylum seekers but also due to the lack of necessary infrastructure.

In the spring of 2020, two investigations by The Wall Street Journal and by Deutsche Welle, Lighthouse Reports, Bellingcat and Trouw, presented convincing evidence that asylum seekers at Diavata had been loaded into vans by men who had their faces covered, and then transported to Turkey.

Victims and witnesses, who spoke to Human Rights Observatory, claimed that these operations were carried out by Greek Police.

Ministry: “specifications and construction has been set by the IOM”

According to what the Ministry of Migration and Asylum has told Solomon, the International Organization for Migration (IOM) is responsible for the specifications, design, tender and construction of the walls at the Diavata facility.

Since 2016, IOM has been a service of UN. Together with UNHCR, they are the main agencies charged with receiving refugee populations in Greece, where IOM is responsible for running the HELIOS program for the integration of refugees (with questionable results) and participates in the administration of the facilities on the mainland (the so-called SMS − Site Management Support).

When asked if the decision to build the wall at the facility was made by the government or the IOM, Kabourakis replied that “it is not being done against the will of the government,” which is “informed.” He referred, however, to an IOM plan “that goes from one to 100.”

“There is daily cooperation with the IOM. There are many things that the IOM has done in Greece, which the government knows about, but which have not been carried out by the government,” Kabourakis clarified.

EC: “the Greek government is the authority”

The statements by the Ministry of Migration and Asylum to Solomon contradict what we were told by the European Commission, regarding who made the decision to build walls around the facilities.

Specifically, in our communication with the European Commission’s Migration and Home Affairs, we received the following response:

“The Greek authorities have ordered the construction of fences (in four camps) and the technical specifications have been prior shared and consulted with the Commission and EASO in order to identify whether they meet EU reception standards.”

We also contacted the third agency involved, the IOM, and reiterated both of the afore-mentioned replies to them. We asked them to clarify, who in fact, made the decision to build the walls.

IOM: “The decision was made by the Ministry”

The IOM responded that “within the framework of the EU project, the IOM support to the Greek authorities in the management of the camps includes also some construction activities.”

However, the IOM clarified that the decision did not belong to the organization.

“All construction interventions conducted within the framework of the EU project are decided and approved by the Greek authorities. The decision to proceed with the fencing of the camps on the mainland was taken by the Ministry of Migration and Asylum (MoMA) in the framework of establishing a controlled entry/exit system in the open reception facilities, based on access cards.”

According to the IOM, at the invitation of the Ministry, an IOM technical team submitted various options in accordance with international standards, for approval by the Ministry.

Once the plans were approved, on January 3 and February 12, 2021, the IOM announced a public tender “to invite competing offers from suppliers and contractors for the creation of perimeter fencing” for the facilities at Malakasa, Ritsona, Polykastro and Diavata.

At all of the facilities, construction work has already started, and according to information from the field, the contractors have been asked to finish the work within a month’s time. IOM clarified to Solomon that the rationale for the walled perimeter “is also to increase the security of the residents by discouraging unauthorized individuals from entering or occupying spaces reserved for asylum seekers, while still retaining open and free movement for its residents.”

The construction projects at the four mainland facilities are being carried out within the framework of the SMS (Site Management Support) program, which is financed by the European Commission.

According to the EC, the new tender announcement on March 31, 2021 by the Ministry of Migration and Asylum for the construction project “Construction of perimeter fencing and installation of security systems at the mainland facilities” at 24 additional mainland facilities, will no longer be funded by the SMS program, but instead “funds are pending from national and EU sources.”

In late March, the European Commissioner for Home Affairs Ylva Johansson and the Minister of Migration Notis Mitarachi Asylum met on Lesvos and Samos to formalize the construction program of new facilities on the two islands and also on the islands of Chios, Kos and Leros. Total funding for the construction is over €276 million.

During the press conference, Johansson mentioned the creation of open structures on the five islands but Mitarachi only spoke of closed structures.

At the time the issue seemed to be in regards to the facilities on the islands, but the construction which is currently underway will soon result in the first closed refugee reception facilities on the mainland.

Petra Molnar, researcher at the Migration and Technology Monitor, made the following statement to Solomon:

“Greece’s decision to close the camps is in line with a global trend of criminalizing migration and turning to containment and detention in place of humane policies that respect people’s dignity and their internationally protected right to seek asylum.”

This report was produced during Solomon’s media lab 2020-2021 and was supported by Faces of Migration.